This guy, former chief planner for Vancouver, BC, and now a consultant, has some important points here, most of which should be familiar to folks who follow Jarrett Walker’s Human Transit. 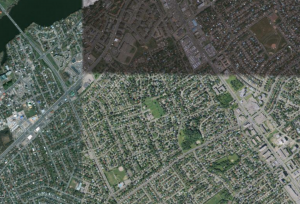 Why Is the American Dream Dead in the South?

Interesting findings, at least as presented here.  The map is interesting to me, too.  Often, maps seem to end up looking like population density maps because the underlying data don’t seem to have been adjusted for that.  So it will seem to look, for instance, that people seem to have more blue cars in NYC than they do in Kallispell, Montana, when really, it’s just because there are more cars in NYC because there are more people there.

The map here isn’t so bad.  The writer of the article (not the paper) almost comes off like he’s blaming “the blacks” (he isn’t) but he doesn’t go very far beyond that, like looking at overall poverty instead of just race.

What the map shows, or tries to show, is the probability that kids born into the lowest income quintile will make it to the highest quintile.

But I’ve only read the abstract of the paper.  Maybe if I read it, I’d answer my own questions?  🙂  It’s a “working paper” from the National Bureau of Economic Research (Paul Krugman says all the research in econ is coming out as “working papers” since the traditional journals take a very long time to publish anything).

Jim E and I were yakking after class about NYC and how much of an outlier it is compared to the rest of the country — e.g., the IRT Lexington Ave line carries more passengers in a day (1.9M) than Boston’s MBTA (~1.3M)  and more than the Washington, DC, Metro system (~750k) and  the SF Muni (~700k) combined [1]) —  and the conversation did, of course, roll around to rapid transit.

I used to be on a train-related mailing list with a fellow named Joe Brennan who does similar work as me but at Columbia College in NYC.  He put together a great web-based “book” about the history of rapid transit in New York and surroundings (remember, Brooklyn was a separate city before 1898 and Queens was a county full of rural towns).  If you’re into that kind of stuff (I am, obviously, and so is Jim and probably Patrick) it’s a good read if a little long.

I think I like the work because it’s much more historical than it is nostalgic and lord knows there is plenty of railroad nostalgia stuff out there.  :eyeroll:

There are a few other “outlier” examples cluttering my head but I’ll save that for another post.

Bottom line is that when you hear someone say “Yeah, well in New York City they …” you should be skeptical of whatever the person says next!