Article: Denver Auditor Blasts Plan to Widen I-70: “Ten Lanes Is Not an Option” | Streetsblog USA.

Refreshing to see a government official recognize that the capacity CDOT wants to add may never be used given the trend of the last decade.

What’s worse is that Denver is spending billions on public transit and this state project will compete with that directly.

Not the first designer to “fix” parking regulations signs and probably not the last.  This one really is simple.

It’s the exceptions that cause issues, though, like if it’s a loading zone for a few hours in the morning.  Do you add another color?  A different pattern?  An asterisk.  It gets complicated in many places.  But for the example above, the proposed solution is better.

I also like that they just stick these up in places without permission.  🙂

More than 355,000 people per day enter Manhattan south of 60th Street along the Lexington Avenue IRT, the only subway line serving the East Side. On the West Side, 458,000 people enter that same area, but they’re split among two local and two express lines.

Meanwhile, another 285,000 people enter the East Side by car while only 144,000 enter the West Side via auto. The differences are dramatic.

The 2nd Ave line should have been built as part of the IND’s Second System plan but the market crash of ’29 stopped that.  Parts of it actually got built in the 1970s, but the city’s near-bankruptcy stopped that.  Nonetheless, the MTA claims it will open … the Phase 1 stub, at least, in two years. 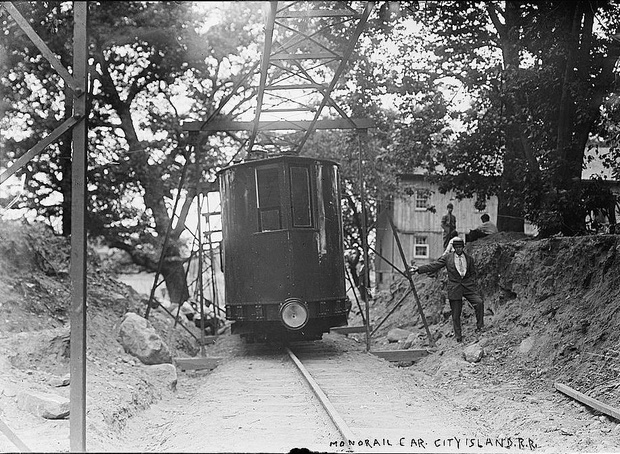 Article:  On This Day in 1910, New York’s Monorail Suffered a Grievous Wreck.

Actually more of a tri-rail affair compared to the Disney-style monorail with which most Americans are familiar.

Anyhoo, monorails are always brought up as a solution to … to … something, usually congestion.  Terribly impractical, of course, and expensive compared to other technologies.  Like maglev planes, these serve only to delay implementation of actual technology like “birail”.