I’ve been too pre-occupied of late to look up what the MUTCD says about colored pavement markings, so I’m not sure where red fits.  In the general red/yellow/green of MUTCD signage, red works – you, as the driver, are prohibited from driving in the transit lane.

Assuming that’s OK and that’s the rationale, what do we do with the green-painted bike lanes that are popping up?  I think the initial idea was that “green = ecosustainabliltyconservationpuppiesandallthingsgood” but in the MUTCD world, green is used for “indicated movements permitted, direction guidance” … which doesn’t really fit.

This Architect Has Painstakingly Standardized the World’s Subway Maps 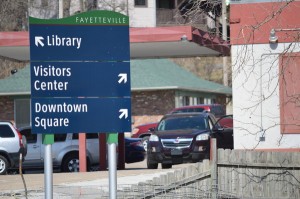 These signs are in NW Arkansas.  The Norman Chamber of Commerce and the city were working on wayfinding signage here, but so far, the only thing that has happened is a few MUTCD-standard signs near the interstate.  An improvement to be sure, but something that should have been installed when the highway was built!