Chicago’s RTA, part-time parent of the CTA, Pace, and Metra, has another new fare collection system.  The CTA had tokens many years ago, then they and Pace went to magnetic stripe cards that either had a certain amount of cash on the card or was valid for a certain amount of time.

Then came a smart card that could be tapped instead of swiped, the Chicago Card and Chicago Card Plus (one of which could be tied to a credit card).  I think those were also good on both CTA and Pace.

None of that was good enough, though, so now the CTA is spending $454,000,000 on another system, Ventra.  This one comes as a fare card or as a Debit card (MasterCard branded).

Questions of waste, fraud, and abuse aside, tap in/tap out cards are clearly the future … at least until the next big thing.  If we could just convince transit authorities to use the tap out feature.  You could charge accurate distance-based fares, because you know the start and end of the trip, but more importantly for transit nerds, you’d have really accurate ridership data.  Heck, you could even calculate revenue passenger-miles, something that isn’t possible with unlinked trips, the current standard.  Very exciting.  For a few of us.

Oh, and don’t try to pay your Metra commuter train fare with Ventra – for that, you still need to have a ticket, 10-ride punch card, or monthly pass.  Or you can pay cash on board to the uniformed men that make their way through the coaches after each stop.  Yes, really. 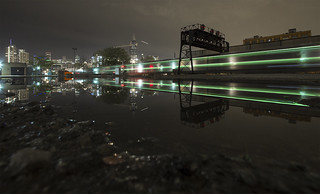 Sometimes, I just like to post pictures of trains.  When they are taken by an excellent photographer who happens to be a friend of mine, so much the better!

This is awesome. I was a regular Metra UP-West line rider when I lived in Chicago and used to see this on evenings just like the one in the image. The interlocking (a railroad junction) A-2 was always a hoot to pass through at night in the winter (which would describe my usual 5:09 departure from the North Western Station) when they had these going.

You could tell who was a regular rider and who was a tourist – “OMG! THE TRACKS ARE ON FIRE!!!”

Generally, heaters like this have been replaced with gas-fired hot air blowers to keep switches clear but, like position-light and color-position-light signals — both shown here! — they’ve mostly disappeared.
This image is looking almost due east from Western Ave, which passes under just about the spot where there is a gap in the fires.  Metra UP-West  trains use the four ex-C&NW tracks to the left that start at what was the North Western station.  The Metra Milwaukee West- and North Districts, and the Metra North Central Service (and Amtrak’s Empire Builder and Hiawathas) all cross from the right in the distance, on three (or four?) tracks that started a Union Station, through the interlocking and then head NW using ex-Milwaukee Road tracks which would be to the left of the photographer.  The Pennsylvania position-light signal (three yellow bulbs in a vertical configuration indicating “clear”) is there because the Pennsy’s Panhandle route also joined this line from the right just behind the photographer.  Their passenger trains from that line once made their way to Union Station this way although most Pennsy trains (like the Broadway Ltd) took a different route to get to the south side of Union Station. There is a plan to move this interlocking (“A-2”) a mile or so in the direction of the image towards the Loop (making it “A-1”) so that they can have more room to spread things out.  This should mean that trains will be able to get through the junction a little faster.  Trains from Union Station crossing here are limited to about 15 mph.  Oh, and behind the photographer is the Metra California Ave yard that maintains cars and engines from the UP lines and behind and to the left, is the Metra Western Ave yard that does the same for the Milwaukee Districts and North Central Service.

Here’s a map and link to lots of nerd pics.