Another on the Texas passenger train idea.  I’ve had this in the buffer for a while and just noticed it again now.

“Highway-loving Texas.”  Let’s see what there is for them to love.

There are several thousand miles of expressway in Texas, most of which can be used at no direct cost to the user, 24 hours per day, every day of the year.

There are three intercity trains in Texas.  One of the trains runs from Chicago to San Antonio via Longview, Dallas, and Ft Worth once per day in each direction.  Three days a week, you can connect in San Antonio with a train that makes it’s way from New Orleans to Los Angeles via Houston, San Antonio, and El Paso.  There is another daily train that connects at Ft Worth for Norman and OKC.

So if a Texan wanted to love a train instead, they wouldn’t have much opportunity, would they?  I maintain that so many people drive in Texas because they have no other rational choice.  The same is true in most of the rest of the country, of course.

The other is this:

““It is, at the moment, considered to be a 100 percent privately financed venture, so in some respects, we may be limited to what our authority is,” [NTCOG senior program manager Tom] Shelton said.”

It’s a 100% privately financed venture as someone just said. What makes government officials think they have any authority? Yes, there are land-use regulations through which they can exercise some control, but if the company thinks it will make more sense to have a station in Waxahachie instead of Ft Worth, then that’s where they’re going to put their station. 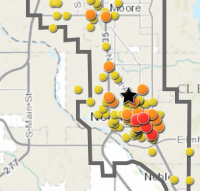 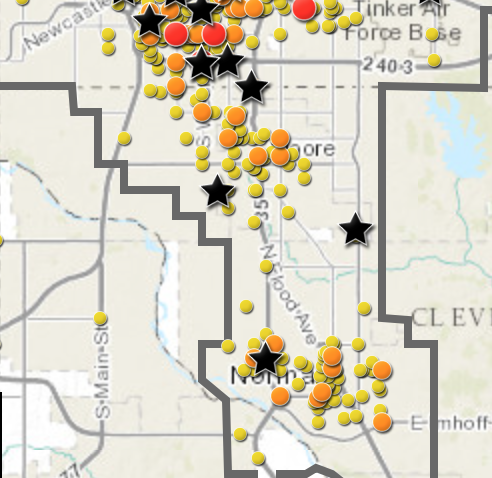 Number of Pedestrian-Related Crashes by Location 2007-2011.

ACOG is doing some nice work with ArcGIS Online. Two examples.  Click through to get the interactive versions.

I got really worried when this hit my inbox.  All I could think of was the city stepping in to “help” downtown Norman.  Downtown Norman (primarily Main from the BNSF Ry to Porter Ave, but also Gray St has grown a LOT in the past decade.  Not that long ago, there was nothing there to attract people.  Now there are pubs and bars and coffee places and breakfast places and tattoo parlors and art galleries.  It’s pretty neat and I was afraid the city was going to try to “help” it … to death.

Not the case, as it turns out, since the focus of this charrette is what has been christened “center city”.  Not Philadelphia, but the area from Gray to Boyd and the BNSF to Flood.

In my opinion, this actually is an area that could use some direction … as long as they don’t break Campus Corner, which is included, but works just fine.  That wasn’t the case in the 1990s when it was kind-of a dump (Burger King?  Really?) but the TIF really made a difference there.

The transportation/land use connection here will be parking.  Parking, parking, parking.  They’ve made a good start on Campus Corner with modern parking meters and occupancy sensors.  More metered street parking would be a fine thing as would permits in the residential areas.

If they follow the rest of Shoup’s Manifesto and make the prices variable to keep one or two spots open per block face, eliminate the 2-hour restriction, and turn the revenue in excess of costs back to the area, then they’ll really have something!

Short article on a program beginning in San Diego, Calif, where they are mapping all city sidewalks.  They assume that there are 5,000 miles of them, because there are 2,500 miles of city streets … but they really don’t know.

San Diego Doesn’t Know How Many Sidewalks It Has

Interestingly (or “amazingly”, if you are as cynical as I am) the City of Norman has already done this, at least for most of the city.  I can’t, however, find a map though I saw it at the city’s presentation on the Comprehensive Traffic Plan.  I did find this report, however, on progress expanding the sidewalk network.  Progress on getting existing sidewalks ADA compliant as well.

Note, too, mention of creating a Railroad Quiet Zone from Acres St to Post Oak Rd.  Some grade crossings are already compliant with what is needed, Duffy St being one.  Next time you pass that way, note the medians and “four quadrant” gates.