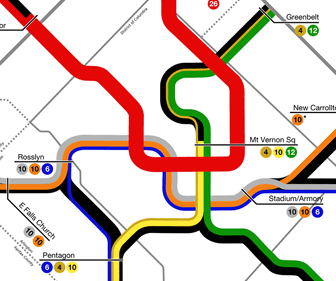 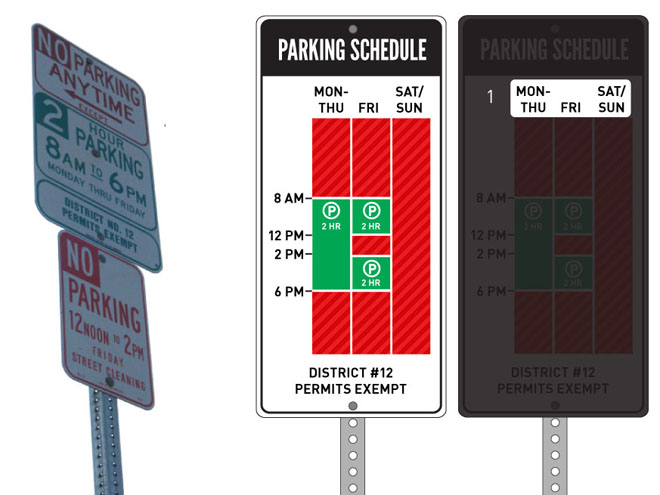 Not the first designer to “fix” parking regulations signs and probably not the last.  This one really is simple.

It’s the exceptions that cause issues, though, like if it’s a loading zone for a few hours in the morning.  Do you add another color?  A different pattern?  An asterisk.  It gets complicated in many places.  But for the example above, the proposed solution is better.

I also like that they just stick these up in places without permission.  🙂

OK, so totally stolen from KMW’s blog post but so cool.  So, so cool.  On a bunch of different levels.

That’s the kind of project I’d like to do as a planner.  I note that it was Nelson\Nygaard doing the work here – same folks that recently designed   EMBARK’s new network.

Semester pressures are affecting my brain.  It was more like 35 years ago — 1978 — not the 45 I said in the comments, and the bus my sister and I rode went up Hwy 99 (near as I can figure) and was not the 99 B-Line bus.  Of course, the B-Line network of frequent buses didn’t exist back then, either.

I think there is something in the water in that whole area — Portland, Seattle, Vancouver — or maybe it’s the damp air?  Moss in their brains?  Anyway, I like the way they think even if the climate isn’t quite to my liking. Vancouver decided against freeways right into the heart of the city and things like SkyTrain (their automated rapid transit lines) and B-Line buses are the result.  Lots of transit, all the time.

The B-Lines are billed in some sources as BRT, but are more like the Metro Rapids in LA or the SBS lines in NYC – no separate right of way, hence, not truly rapid transit, but limited stops and short head-ways.  Proof-of-payment fare collection allows all-door boarding to shorten dwell time at stations.  Whatever you call them, they are successful.  Apparently TransLink uses them as pre-cursors to SkyTrain extensions – the 99 used to run further east but now ends at the SkyTrain line that replaced it.

Look, too, at this chart on TransLink’s site.  It shows their most and least successful routes.  Note that, with very few exceptions, the most successful routes are straight and the least successful are convoluted.  If you go into transit planning, keep that in mind.  Somewhere along the line, Jarrett Walker of Human Transit has blogged about this very subject, so it’s not exactly a revelation.  Nonetheless, it’s an important factor in network design.